A FEW YEARS AGO, MY SISTER-IN-LAW, SUSAN, asked for my advice. She was considering transferring her IRA into the defined benefit plan under which she was covered. The transfer would result in greater retirement benefits. She wanted to understand the pros and cons of transferring the money and was especially concerned with whether the conversion rate was fair.

We had a good conversation about the underlying discount rates used to convert the transfer to additional benefits, the attributes of receiving a pension that is guaranteed by the state of California, and the risks and rewards of keeping the money in an IRA. The conversation ended without my knowing what her decision was.

Providing Susan with advice started me thinking about whether that conversation was a Statement of Actuarial Opinion (SAO). So let’s do a little research.

Under the Qualification Standards,1

…a “Statement of Actuarial Opinion” (SAO) is an opinion expressed by an actuary in the course of performing Actuarial Services and intended by that actuary to be relied upon by the person or organization to which the opinion is addressed.

“Actuarial Services” are defined in the Code of Professional Conduct as “Professional services provided to a Principal (client or employer) by an individual acting in the capacity of an actuary. Such services include the rendering of advice, recommendations, findings, or opinions based upon actuarial considerations.”

So did I provide “professional services”? I did not dream of charging Susan for the conversation. It might have made conversation at Thanksgiving dinners more interesting, but I don’t think that would have been a smart move. So maybe Susan is not a client or an employer, and I did not provide a Statement of Actuarial Opinion. 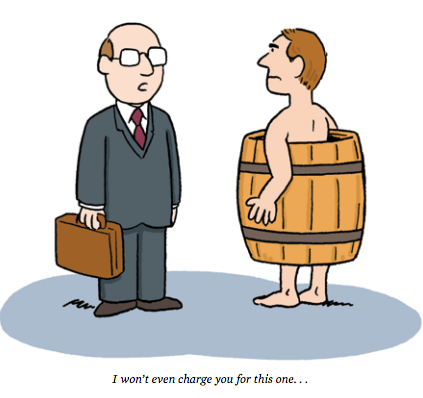 Let’s change the example. Mike is a pension actuary who receives a phone call from a nonprofit organization he supports. The organization asks him whether its self-funded medical plan is adequately funded. Even though Mike is a pension actuary, he decides he will try his hand at valuing medical benefits and save the nonprofit the expense of
employing an actuary from the health field. Because Mike was not paid for the assignment, he presents his findings orally at a board meeting. One of the board members contacts another actuary, Dave, for a reality check. Dave has concerns over Mike’s presentation to the board. Dave contacts Mike and asks pointed questions about his work. Mike soon realizes his work was substandard. Mike immediately contacts the board to apologize and retract his work.

Or consider Glenn, a pension actuary who has been retired for a number of years. He has not kept up with his continuing education requirements. Glenn took on a one-off contract to determine whether a retirement plan met minimum funding requirements. He decided to produce a valuation that complied with Internal Revenue Code §412. His conclusion is the actuary on the case used discount rates that were much too high and employed a funding method that was designed to defer a substantial amount of liability well into the future. Glenn’s report was highly critical of the work of the plan’s actuary, Helen. The plan sponsor contacts Helen and expresses concern over her work. Helen is offended by Glenn writing a report critical of her work and never bothering to call her. Helen calls Glenn to discuss why he felt her work was deficient. In that telephone call, Helen realizes Glenn did not know the law changed seven years ago and now minimum funding requirements are calculated under Internal Revenue Code §430. Glenn would not back away from his conclusions and leaves the plan sponsor with the impression that Helen’s work was deficient. Helen registers a complaint with the Actuarial Board for Counseling and Discipline (ABCD).

The moral to the story is that any actuarial advice you render could be considered a Statement of Actuarial Opinion— so you are bound to follow the Qualification Standards, the Code of Professional Conduct, and the actuarial standards of practice.

Glenn receives a letter from the ABCD asking for further information on his work and conclusions as well as documentation of his having met the continuing education requirements. Glenn realizes he’s in deep trouble. So he decides to refund all of the fees he received for this assignment. In answer to the ABCD’s letter, Glenn says that he did not charge for his work and thus the work was not subject to any standard. He also threatens that if the ABCD does not cease its investigation, he will resign from the actuarial organizations to which he currently belongs.

In all three examples, the recipient of the work ultimately did not pay for the services. So, should the level of professionalism be contingent on the amount charged for the work? Clearly not!

Working on the ABCD, I have come to recognize that each case stands alone in determining the outcome. A number of factors may come into play in its deliberations, such as:

Back to our examples. In my conversation with Susan, let’s assume my statements to Susan did not comply with the disclosure requirements of ASOPs No. 4, No. 27, and No. 41. I would expect the ABCD to determine that if the work communicated a reasonable result, then this might not be treated as a material violation of the Code of Professional Conduct.

In Mike’s case, Dave probably believed that the issue of Mike’s inadequate work was resolved with Mike’s apology to the board and retraction of his work. Had this case been brought before the ABCD, it would be obvious that Mike was working outside his area of expertise, as well as not being qualified to value medical benefits. In addition, he likely violated a number of ASOPs.

The ABCD might be sympathetic with Mike’s goal of saving the nonprofit money—but the ABCD would likely investigate Mike for not being qualified to work on a medical plan and for his lack of skill and care. These might be considered violations of Precepts 1 and 2 of the Code of Professional Conduct.

Finally, Glenn has a number of issues the ABCD would consider. Was Glenn qualified? If he did not keep up with his continuing education requirements, then he did not meet the requirements of the Qualification Standards. This is a Precept 2 violation. Additionally, his work lacked the skill and care the Code of Professional Conduct requires—a Precept 1 violation. Glenn’s attitude about not resolving his differences with Helen would not be well received by the ABCD and may well be a violation of Precept 10. His contention that by refunding fees his work did not have to comply with any standards would like be rejected. Finally, resigning from an actuarial organization to eliminate a complaint simply will not work, because all the actuarial organizations have policies in place not to accept resignations from members who are under investigation by the ABCD. Glenn’s attitudes would likely be considered aggravating factors with the ABCD’s deliberations.

So the moral to the story is that any actuarial advice you render could be considered a Statement of Actuarial Opinion—so you are bound to follow the Qualification Standards, the Code of Professional Conduct, and the actuarial standards of practice.

RICK BLOCK is co-owner and chief actuary of Block Consulting Actuaries and a member of the Actuarial Board for Counseling and Discipline.