THIS ARTICLE DISCUSSES the actuary’s responsibility for assumptions. It is told from a health actuary’s perspective because that is the work I did, but its principles apply equally to all practice areas.

Amanda Actuary was reviewing a rate filing for Super Start-Up Health Plan (SSUHP) that had been prepared by Jason Modeler. Jason was an up-andcomer at their small actuarial consulting firm, while Amanda was one of the more senior actuaries. SSUHP was a new client that needed to gain market share. The rates looked competitive, which surprised Amanda. She had talked to Jason about SSUHP several times, and he was usually complaining that its costs were high and it was going to be hard for the company to be competitive enough to enroll many groups. 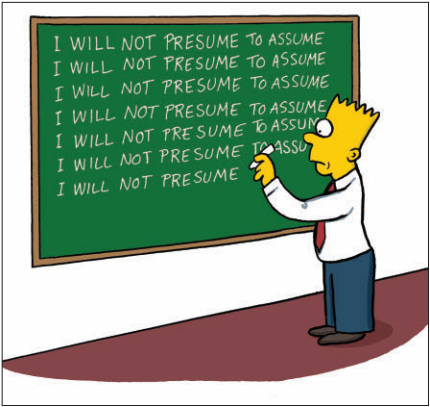 As she read the report and looked at the assumptions, she saw what was probably making the difference. The utilization rates were low, at least compared to what she was accustomed to seeing from her clients and other clients she was familiar with in the office. She looked at the assumptions and saw that SSUHP was using a vendor called No More Waste to manage utilization. The assumptions came from No More Waste. Amanda decided to talk to Jason about this part of the rate development before continuing her review.

She walked down to Jason’s office and told him she had some questions about SSUHP’s filing. She asked Jason, “Why do you think they’ll be able to achieve these utilization levels? I’ve never seen anything this low in this part of the country.” Jason replied, “I don’t know if these rates are achievable or not, but No More Waste says that they are, due to the partnerships that they have developed with various provider systems. Anyway, I clearly state I relied on No More Waste for these assumptions, and SSUHP is fine with that. Apparently, SSUHP got tired of trying to negotiate lower hospital payment rates with Good Health Hospital. They told me that those discussions were going nowhere and that the people at Good Health were getting rather testy—the relationship was breaking down. It’s a good thing they already have a contract and were just trying to get lower rates.” Amanda asked, “Is Good Health the provider that SSUHP and No More Waste are partnering with?” Jason replied that it was.

“Have you reviewed the ASOPs”— referring to the actuarial standards of practice promulgated by the Actuarial Standards Board, which identify what actuaries should consider, document, and disclose when performing an actuarial assignment—“to ensure that you are disclosing everything properly in the report?” asked Amanda. Jason replied, “Yes, I am following ASOP No. 41, Actuarial Communications, Section 3.4.3, ‘Reliance on Other Sources for Data and Other Information.’ It says:

‘An actuary who makes an actuarial communication assumes responsibility for it, except to the extent the actuary disclaims responsibility by stating reliance on other sources. Reliance on other sources for data and other information means making use of those sources without assuming responsibility for them. An actuarial communication making use of any such reliance should define the extent of reliance, for example by stating whether or not checks as to reasonableness have been applied. An actuary may rely upon other sources for information, except where limited or prohibited by applicable standards of practice or law or regulation.’

Amada thought a moment. “You quoted it correctly, but it applies specifically to data; I believe there is another section on assumptions. Let’s check.”

She pulled up Section 3.4.4, “Responsibility for Assumptions and Methods.” “I’ll paraphrase it because it’s longer than Section 3.4.3:

“So this is the section that applies to assumptions. Since you don’t say anything about the utilization assumptions other than where they came, from that means that they do not conflict with your judgement. Is that true, and if so, how do you come to that conclusion?”

As an actuary, you can’t simply pass along the assumptions made by another party as part of your modeling work. Instead, you need to scrutinize the work of others, and if you can’t conclude that the work aligns with your judgment, you need to disclose that fact.

Jason looked a little startled. “I didn’t look far enough in ASOP No. 41. The assumptions look aggressive to me, but I figured No More Waste knew what they were talking about and SSUHP has agreed with them as well. I think I need to write something that is a blend of items (b) and (c) because they seem aggressive, but perhaps No More Waste has a new approach that is more effective.”

“Have you asked SSUHP or No More Waste for examples of what they have actually achieved?” asked Amanda. Jason replied, “I have; they said they’ll provide the information but never got back to me. I guess I need to tell them I’ll say the assumptions look aggressive unless they can provide some specific experience for me to review. Even then, the assumptions could still be aggressive.”

Amanda asked, “If they are partnering with Good Health Hospital but the relationship is strained, then is it likely to be harder to achieve the utilization targets?” Jason paused a moment and said, “Yes. It looks like I need to write a lot more in the report about where the assumptions came from and what may need to be done to achieve them.” “Agreed,” said Amanda. “Let me know when you are done, and I’ll continue my review.”

What’s the moral of this story? As an actuary, you can’t simply pass along the assumptions made by another party as part of your modeling work. Instead, you need to scrutinize the work of others, and if you can’t conclude that the work aligns with your judgment, you need to disclose that fact. Ultimately, you are responsible for your actuarial services—so be sure you’re clear about where the numbers come from and whether you agree with them.

DAVID F. OGDEN, MAAA, FSA, is a member of the Actuarial Board for Counseling and Discipline.