DURING MY SIX YEARS ON THE ABCD, I haven’t seen it all, but I’ve seen a lot of it. Good practice, bad conduct, and unqualified practice.

The Actuarial Board for Counseling and Discipline has averaged about 20 complaints each year since 1992, though the number of complaints has increased lately. Two sources account for most of the increase: a misunderstanding of what constitutes a material violation of the Code of Professional Conduct, and public pension plans, with a considerable overlap between them. Some actuaries believe that the actuarial standards of practice (ASOPs) need to be strengthened, and have filed complaints because actuaries aren’t meeting those higher, undefined standards. Other actuaries believe that any violation of the Code or ASOPs is a material violation, which is not accurate either. The ABCD maps a Subject Actuary’s conduct and practice against the Code and existing ASOPs. The ABCD then analyzes the facts and circumstances of each complaint to determine whether a violation occurred—and if so, whether it was a material violation. 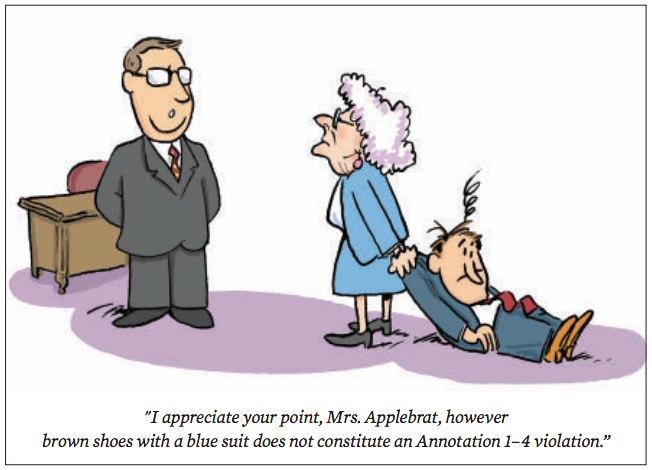 But the ABCD also sees bad conduct and bad practice. I’ve given several professionalism presentations over the past six years, and many attendees are quite surprised that their personal conduct could result in discipline. Precept 1 states, “An Actuary shall act honestly, with integrity and competence, and in a manner to fulfill the profession’s responsibility to the public and to uphold the reputation of the actuarial profession.” Precept 1 is further explained in Annotation 1-4, which states, “An Actuary shall not engage in any professional conduct involving dishonesty, fraud, deceit, or misrepresentation or commit any act that reflects adversely on the actuarial profession.” Note that the first clause specifies professional conduct, while the second clause refers to any act that reflects adversely on the actuarial profession. An actuary who commits an egregious, publicized felonious act has damaged the reputation of the actuarial profession when identified in the media as an actuary. If Bernie Madoff were an actuary but did not provide any actuarial services as part of his Ponzi scheme, would you want him to remain a member of our profession?

Bad practice seems to be concentrated among very small firms. Although the majority of recent complaints involve pension actuaries, this is not an ACOPA issue. The sole pension practitioner who appears before the ABCD is usually a member of the other actuarial organizations but is only rarely a member of ACOPA.

The second group is a sadder story. An actuary may have a long and successful career and then retire from active employment. The actuary is now retired, and doesn’t see a need for further Continuing Education. The actuary no longer provides recurring Statements of Actuarial Opinion but wants to do some actuarial work “on the side” for various reasons. The work is no longer checked or peer-reviewed, and might not reflect the most current laws or regulations. A complaint is filed, and that actuary’s professional reputation over an entire career is now in jeopardy. The ABCD has received several of these complaints over the past few years, which was the impetus for my End Paper article, “When Is It Time to Hang Up the Holster?” in the May/June 2013 issue of Contingencies. Would you consent to surgery by a doctor who is retired and has not kept current in his field but performs an occasional procedure “on the side”?

Actuaries who interact with the ABCD exhibit different behaviors. Some are contrite, admit their work failed to satisfy some of the ASOPs, and promise to improve their practice. Other actuaries argue that the complaint is merely a difference of professional opinion, or that they satisfied the Code and ASOPs in a very narrow, technical manner. Other actuaries are belligerent, arguing that the ABCD has no right to judge their practice or conduct. By far, the most satisfying case involved an actuary whose case was disposed by counseling in person. That actuary expressed remorse and related at the counseling session how the experience had led to a change in practice. In fact, that actuary offered to write an anonymous Up To Code article on how the ABCD process changed their life. (I hope that actuary follows through with that commitment.)

Six years is a long time, and I will miss the people who served with me on the ABCD. I already miss Curtis Huntington and Paul Fleischacker, and wish I could have one last conversation with them. ABCD members often disagree on the resolution of a case, and sometimes intensely, but always respectfully. We always leave our disagreements in the meeting room and appreciate one another’s company outside it. I rarely enjoyed the task of being an ABCD member, but it always satisfied my need to give back to a profession that I love very deeply. I’ll miss it.