One of the most common instances of actuarial reliance on others occurs when obtaining data for review and analysis. In fact, Actuarial Standard of Practice (ASOP) No. 23, Data Quality, was developed specifically for this situation. Additional areas of common dependence relate to the selection of assumptions, using work performed by others, and reliance on models outside the actuary’s area of expertise (ASOP No. 38, Using Models Outside the Actuary’s Area of Expertise [Property and Casualty]).

Our ASOPs recognize this and explicitly refer to the practice. In fact, all ASOPs contain a section on disclosure of such reliance (it’s important to note that reliance may be restricted by some ASOPs, laws, or regulations).

In recent years, the Actuarial Board for Counseling and Discipline (ABCD) has had several cases come before it involving a reliance on others in issuing a joint opinion. What is acceptable practice in those circumstances?

Consider the following hypothetical situation. A consulting firm was engaged to perform a valuation and funding analysis of a large post-retirement benefit plan. The plan encompasses pension, life, and health benefits for retirees and their spouses. It’s generally not expected that a single actuary will have met the U.S. Qualification Standard for practice in all areas of the plan. As a result, a team was organized within the firm to jointly issue an opinion on all areas of the plan. Each specialty designated a qualified actuary to review that portion of the plan in his or her area of expertise. Significant assumptions and underlying data were provided by the plan sponsor. The client instructed the consultants to use interest rates that were preselected and demographic information that was provided to the sponsor by another actuary.

The consulting team didn’t perform any additional analysis of the assumptions or review of the data before completing its work. At the conclusion of the assignment a report was issued, signed by three actuaries.

Question: Is this acceptable practice?

In this case, the work was contingent on the propriety of assumptions and data provided by another actuary. No mention of the source of these items was included in the statement of actuarial opinion or in the report. The assumptions were taken whole and not reviewed, and the retirement assumption led to the retiree health portion being very misleading. Before the opinion was issued, it became clear that some of the data were in error. No attempt was made to correct the data, nor was the health actuary made aware of the issue. 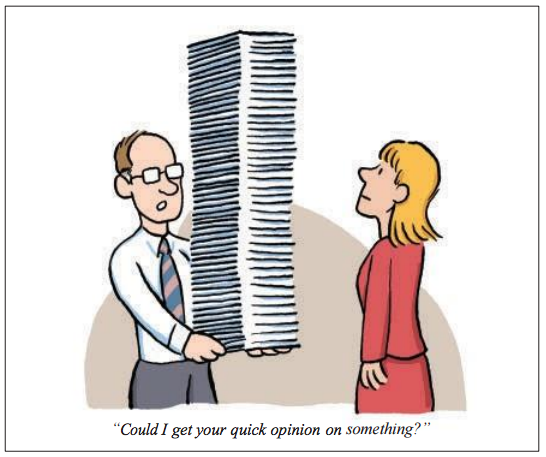 Such practice will come before the ABCD when there’s a problem with one or more portions of the opinion and a complaint is made. In this example, there’s no reference to any of the actuaries providing a caveat as to the portion of the report he or she is opining upon. Absent such language, the entire report is owned by every signatory. Even if the health actuary has done fine work, if the pension actuary hasn’t, both are subject to potential discipline for the poor work.

In addition, ASOP No. 23, Data Quality, includes instruction regarding an actuary’s responsibility for reviewing the data for reasonableness, to the extent possible. If the review is minimal or nonexistent, the actuary is required to disclose this and the fact that the opinion relies on data that are supplied by others. The lack of such disclosure is a potential violation of the Code of Professional Conduct.

Consider another scenario. A large insurance company has both a life and a casualty operation. While the business normally is written in separate companies, this insurer chose to issue its large block of disability insurance on the property/casualty (P/C) paper. This arrangement had been approved by the appropriate regulator and isn’t at issue. The appointed actuary for the P/C company (a fellow of the Casualty Actuarial Society) provided the statement of opinion on the reserves.

Question: Can the P/C actuary opine on the total reserves, including this substantial block of disability business?

Again, the “but” is important. If the actuary is qualified to issue the report, there’s no problem. A casualty actuary, however, may not meet the Qualification Standard for signing off on the disability reserves. The disability block may be significantly under-reserved and that could cause a problem with overall reserve levels, leading to a complaint to the ABCD. The issue of qualifications is an integral part of the complaint regardless of the reserve adequacy.

Generally, cross-qualification is rare. But the U.S. Qualification Standards outline several ways that it can be accomplished. One way is to rely on the expertise and work of another actuary. In this case, the organization is likely to have an appointed actuary for the life company. By having that actuary perform the review and analysis of this block of disability business and then provide the P/C actuary with a memorandum and report that can be relied upon, the problem can be avoided. As long as the opining actuary discloses that reliance (as required in ASOP No. 41, Actuarial Communications), there is no qualification issue.

As both the above scenarios illustrate, the concept of reliance on the work of others is both acceptable and common. When trouble arises, it often is related to a lack of disclosure. When in doubt, disclose as much as possible. Absent appropriate disclosure, you are taking full responsibility for everything in your report. If you disagree with the assumptions or think they aren’t reasonable, indicate that in writing. It can be difficult to communicate these requirements with your principal, and you may find yourself in disagreement with another actuary’s input. In these situations, keep the Code of Professional Conduct and the ASOPs in mind. At the end of the day, you will be the one living with your decision. And remember: If you sign it, you own it.

JANET FAGAN is a member of the Academy, a fellow of the Over 100+Successful Installations! Casualty Actuarial Society, and vice chairperson of the Actuarial Board for Counseling and Discipline.